They stole my flag

The 1980s. When I was young the Union Flag was a symbol of the far-right. When I saw it I felt a bit wary. Who was flying it?  And why? And were they looking at me?

National Front march from the 1970s. The movement from which the BNP would emerge by 1982.

The 1990s. The whole Cool Britannia thing changed that. In 1996 there this rather fabulous collaboration between David Bowie and Alexander McQueen. Great artists both. How could the flag not be cool? 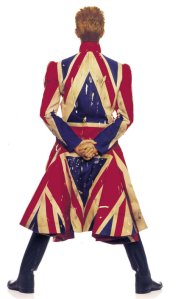 2012. At the London Olympics there were plenty of reasons to wave it, from the amazing opening ceremony, to the achievement of our athletes. It could be a celebratory symbol. I felt pretty happy about it.

Last week. I drove into my station and a large group of UKIP Leave campaigners were flying the Union Flag alongside banners that said: “we want our country back”.

Today. I walked past a scarecrow made for a parish competition (it’s a rural thing). It was decorated with ‘GB’ signs and Union Flags. In fact, based on the scarecrow design, the theme was tennis and the flags were celebratory. But. I still felt uncomfortable. Like I did in the 1980s.

They stole my flag.

Yes. I do want my country back.*

*still working out the most effective way to do that.