Posted on September 13, 2014 by rachelcockett

BTW. More fabulous images by students at Duncan of Jordanstone College of Art & Design in Dundee on the #indyref theme here.

At Primary School the following messages where drilled into me:

I got older.
Europe got bigger.
The Berlin Wall came down.

David Bowie at the Berlin Wall (just because)

The Euro was introduced. I travelled through three countries using one currency.

I don’t want a new Border.
Divisive in so many ways.

I believe in Democracy. I’ve always voted. It is no more a utopian solution than any other form of government. 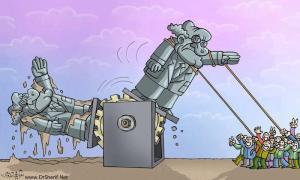 “Yeah.
Meet the new boss.
Same as the old boss“.