The end of the Rea Aqueduct

I live in Worcestershire near the Leominster – Stourport Canal. An unfinished canal that none-the-less has left several marks in the landscape.

OS maps detail a public footpath crossing the River Rea via a footbridge. Knowing nothing of the local history and arriving at the ‘footbridge’ about 11 years ago I was confronted by more greenery than you normally get on footbridges. It all looked a bit odd, but there was a path, so I crossed. The next time I walked the same way I decided to scramble down the bank to see what I was crossing.

I was confronted by this:

Hmm. Looks crumbly. Anyway it prompted me to take a photo (which I uploaded to the Wikipedia Entry for Leominster – Stourport Canal) and to do a bit more research. The Lost Labours exhibition showcases the canal’s history and remaining features.

Last weekend when walking I saw a sign, then a few more: 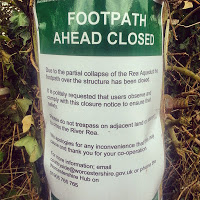 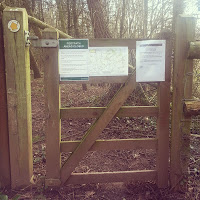 So I walked past the signs and down the old tow path.

And I scrambled down the side…oh:

Well it survived until February 2013. Not bad.The aqueduct was built in 1792-3. There is an account on Canal Routes which mentions that the aqueduct was described as ‘unstable’ in 1795.

Article about the aqueduct’s collapse by Waterways World. 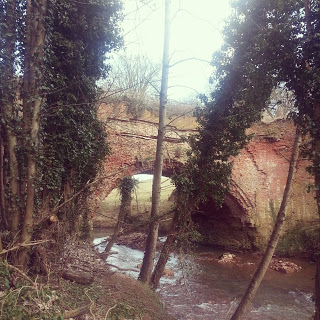 The other side’s better but I don’t think I’ll be walking across it again.

On my walk back I was reminded of other changes.

These poles were once part of a hop field. 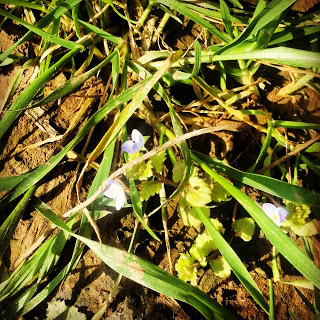 But the speedwell still grows.
FIN.